Since my last post, I bought a small monitor to use as a dedicated display for the Social Uproar. Prior to this, I had been hooking the Pi up to my TV. I got a great deal on a small (12 inches diagonal, approximately) Dell monitor, because our local library was having a renovation sale.  However, the monitor only used a VGA connection. I had to buy an adapter to convert that to HDMI since the Pi only uses HDMI for its video out.  I wanted to get the cable immediately because I wanted to show off the unit as part of the Windows Devices showcase table at Azure and the Modern Datacenter event, so I bought one at Fry’s which was considerably more expensive than buying one on eBay.

Nonetheless, now that I had a small and therefore portable monitor, and a power strip to go with it, I had everything that I needed to make this a self contained demo kit. 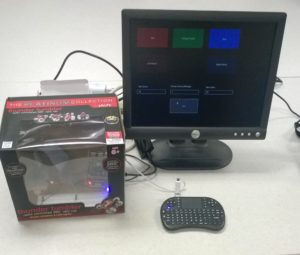 When I tried my Social Uproar app on the smaller screen, I made some changes.  Have I mentioned that all my source code for this project is on GitHub? Also, when I was at “Let’s Dev this Web” (a developer training event) earlier this year, I took some time to start to build the voting website, but I chose to use the MVC software architecture, which I don’t actually know.  I picked it because it is something I need to learn.  So http://socialuproartest.azurewebsites.net/ is a work in progress too.

Well, almost. I still haven’t bought the motor control board that I need in order to hook up the “flappy bird” and the “floaty ball”.