Ever wonder what it takes to make a one-day, one-track IT conference?  It might be simple for people and organizations such as SharePoint Saturday Chicago and SharePoint Fest, who have mastered the art of a one-day multi-track or multi-day multi-track even, but if this is your first time putting together a conference, boy are there a lot of moving parts!

I’ve got previous experience organizing user group meetings, so when I received an email about getting involved in the IT Community Roadshow  from MVP Lead at Microsoft, back on Sepetember 23, 2015, I jumped at the chance. They had a list of topics they wanted to cover.  After talking to my boss and looking at when content from Microsoft would be available, I focused in on Azure. This was in mid-October, 2015. By mid-November I had the support of my friend and fellow MVP, Kris Wagner and Microsoft committed $2000 to fund our event. the event outline that Microsoft had provided was for a half day event.  I thought we would be better served by a full day event.  By December 18th, I came up with an agenda that combined Microsoft’s desired  “Modernize your Datacenter” and “Azure Infrastructure” topics. I wanted to involve a number of subject matter experts from my company, PSC Group, as well as Kris and some of the people I work with at Microsoft.  I had also picked an event date: April 7, 2016.

From my experience co-leading the Chicago SharePoint User Group with Jamie Story and Leo Doyle, I knew that I had to nail down the “3 P’s” of the meeting, and this applied to this conference too.  The “3 Ps” are “Place, Presenters, and People”.

Place has to come first because you have to make sure you have a specific location and date for the event.  The location and date are also critical for confirming if a person is available to speak on that day.   My favorite place to hold Microsoft technology events is at Microsoft, however, Microsoft limits how far in advance you can book their conference rooms.   So I borrowed a location idea from the Schaumburg .NET User Group, with the help of their leader Aalap Thakkar.  This group meets at the Arlington Lakes Golf Course Clubhouse, run by the Arlington Heights Park District. I had attended a user group meeting there and knew it could accommodate 80+ people in theater layout.  After getting a tour of the building, I decided it would work.  It would seat 60 people in classroom layout. It had a sound system. It was getting renovated but would be done prior to our event. Two things I didn’t ask when I looked at the venue, but in retrospect should have are: 1) How many bathrooms are there and where are they and how big are they? and 2) Is there an elevator?

The building had four bathrooms, but two were still being remodeled when April 7th came around.  The two bathrooms that we had were one person bathrooms and they were one for each gender.  This lead to long lines during breaks.  Just changing the signage on the bathrooms to unisex would have alleviated this somewhat.

The meeting room was on the second floor.  Fortunately, the building did have an elevator.  Bringing all our stuff in without the elevator would have been much more difficult.

In January 2016, I signed the contract for the venue.  I worked with PSC’s CFO to make sure that I could sign that contract as a representative of PSC and not on a personal basis.

I had a pretty good idea of who would present what by February. I had MVP Kris Wagner, 5 coworkers, and 2 guys from Microsoft, plus I would feature a Windows 10 Device Showcase table as a way of involving my friends from the Microsoft Store in Woodfield mall.

Simple as that, right?

Originally, I had an afternoon keynote and another afternoon session as being presented by Coworker A.  I had Coworker B slated to deliver a morning session.  They both moved on from PSC in early March. I dropped the afternoon keynote, giving the other sessions more time.  I replaced Coworker B with David Giard, our local Developer Evangelist from Microsoft.  Many thanks to David for stepping in to cover the topic of Containers!  Likewise, Brice McDowell stepped up to cover the session on Azure Active Directory and Identity solutions.

At one point, a coworker wanted to know if I was going to cancel the event since some of the speakers had to back out.  Heck NO! We already had 40+ people registered! The show must go on!

But not without a little more speaker scheduling drama. At the end of March, with less than 12 days to go, Kris gets sent on an out of town project.  He’s a consultant too, and billable project work has to come first.  So I try to replace him with Person X.  Until I find out on April 4, just three days out that Person X can’t present either.  Fortunately, the topic is Azure Networking, which I know just enough about to be able to present.  So I whip up a presentation last minute, and pull it off, although I do have some audio troubles with the videos I’m using.

In early February 2016, I set up the Eventbrite event to collect and manage registrations for the event.  Eventbrite.com is a really great tool for this purpose! I work hard to get the word out and get people registered.  Microsoft Corporate does some advertising of it.  David Giard posts it to Facebook.  I tweet about it and do an email blast about it.  I tell other user group leaders to tell their members. 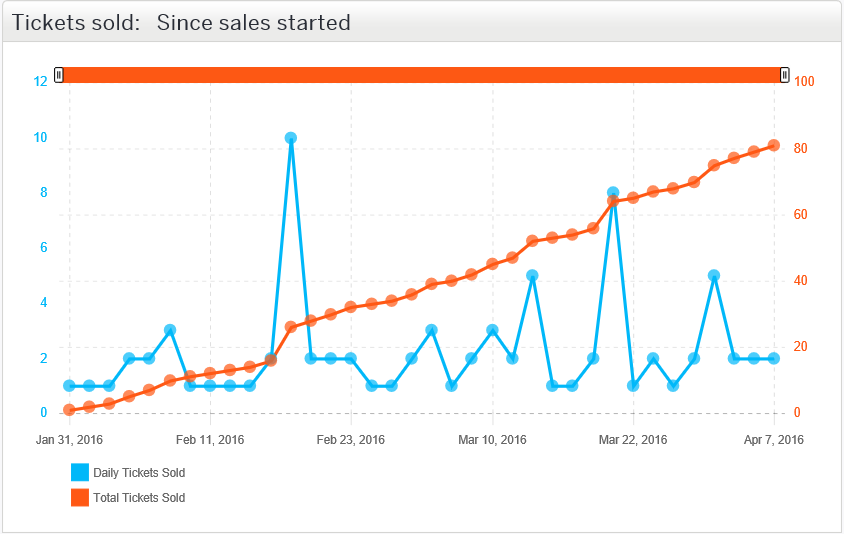 We get 80 people registered. A few of those include staff, but even so, with 80 registrations, even with 50% no-shows – a common occurrence at free IT events, we will still have a good event.

I order catering – breakfast and lunch – for 60 people.  I buy snacks at Sam’s club and Walmart. The venue provides coffee and water.  I let people know ahead of time what I am serving via a FAQ and send an email blast to the registered attendees to let them know that the FAQ is available. I don’t know how many people read the email blast.

Two days before the event, I print up badges.  I also print up all the flyers – there are a total of about 10 of them – that I want each attendee to get.  Two of the 10 are a speaker eval and and event eval. The rest is a mix of information about PSC and Azure.  Everyone also gets a bag and a pad of paper and a pen.

The evening of April 6, I go over to the venue.  I’m supposed to get there at 4, but I get there closer to 5 because it takes me much longer to pack up all the materials than I had realized.  Aalap and I set up what we can.  The building closes at 6pm, so I go home ready to return the next morning..

The day of the event, we get about 30 attendees.  When you subtract out the staff registrations and duplicates and weird out of country registrations, 30 is pretty much at that 50% mark.

My coworker Norm Murrin is there and does his best to record everything.

Brian Lewis brings a countdown app on an iPad, and it helps keep all the speakers on time.

After Brian’s keynote, I speak.  The audio for my demo videos is hard to hear, so Mike Kappel, a user group leader from the Software Development Community comes to my rescue with a Bluetooth speaker.  The rest of the day feels like a blur.

At the end of the day, most of the box lunches were eaten, many of the granola bars, but few of the bags of chips.

It doesn’t end there…

Even though the conference is over, the work of the conference is not. I have approximately 30 speaker evals and 30 event evals to go through and analyze. The Monday after the event, it takes me about 4 hours to put away all the materials I brought back to the office.  Later in the week, I enter all the speaker evals and give them their scores.  I’m pleased to say that on average, attendees leaned heavily toward agreeing that the speakers were knowledgeable and kept them engaged.

I assembled and posted links to everyone’s slide decks.  I still need to work with my coworkers and Microsoft to edit the videos and get them published online. I still need to analyze the event evals.  I still need to send an email blast to attendees and no-shows letting them know the session content is available online, once it is actually published.

Meanwhile, I have 3 more presentations coming up in the next 13 days that I also need to prepare for.  There’s an event next month that I need to drive attendance for.

“Time is nature’s way of making sure everything doesn’t happen at once.  Problem is, it doesn’t work!” – Anonymous

Putting on a one-day, one-track conference is like putting on a play. It’s a play with an ensemble cast, very little in the way of stage crew, no full cast dress rehearsal, and only one performance. There’s only one microphone, and only two lights to control – the room lights and the video projector.  The goal is to inform and educate rather than entertain, but our speakers have to be engaging (entertaining) anyway.

It’s a lot of work, but it’s good for the community, and that community gave positive feedback, so I’d do it again!

One Reply to “Behind the Scenes: The Making of ‘Azure and the Modern Datacenter’, a one day conference”